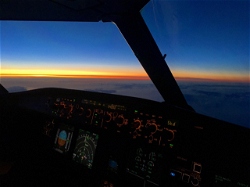 N444CE (c/n 45478) is a modified Douglas DC-6B flown by Everts Air Fuel in Alaska, USA, to deliver fuel in the remote parts of this region. It was originally built in 1958 as F-BIAM for the French airline Union Aéromaritime de Transport (UAT), which operated the aircraft on its domestic, European and African network. It was later operated by Air Afrique, and then another French airline: Trans-Union, as F-BOEX.
After some important modifications, it operated in Canada as a fire tanker with Conair Aviation. This airframe was even used in the 1989 movie "The Experts", staring John Travolta.
A couple of decades later, in the early 2000s, it was bought by Tatonduk Outfitters, the parent company of Everts Air. It has been modified to carry fuel, and since then this airframe is still flying around Alaska; at the time of publishing, her last flight was on 16/12/2022.

As I initially wanted to accurately reproduce the state of this airframe in 2022, I reproduced its weathering; however, if you prefer a cleaner "out of the paintshop" livery, I have also included this version.

You can choose between these 2 versions:
- 2009: clean, "out of the paintshop" version, no weathering;
- 2022: weathered version, as the real airframe has been recently.

Please have a look at the screenshots, where you can see both versions depicted.

The main files of this livery are in 8K; this is the main file available for download. However, if you have framerates issues with this version, I have also made a "lower" 4K version available to download as an alternative file.

II. Additional notes regarding this livery:
- If you are familiar with the real aircraft, or if you are observant enough, you would have noticed that the two eagles on the nose-art are different from each other, as this nose-art was hand-painted. Both are accurately represented in this livery.

- Although the real aircraft is a DC-6B, I used the DC-6A model from PMDG because it did not make sense to use the DC-6B "passenger" model for an aircraft that carries fuel as cargo. However, this means that the 3D model has a front and rear cargo door, whereas the real aircraft only kept its original rear passenger door.

You will need the free PMDG Operations Center v2 to install this livery. Please refer to "readme.txt" inside the file once downloaded for further instructions regarding installation.

I hope you'll enjoy it, happy flying! :) If you do, please leave a review and a rating down below, it would be highly appreciated, thank you!

Amazing livery! If you'd like to improve it I can provide some pictures of the top of the wings. The real 444 doesn't have those black areas on the engines, it just has small wing walk areas. I have pictures from when I was a mechanic on the fleet in 2019.

Thank you! You are totally correct, I have to say that I may have focused too much on the fuselage, as I wanted to make it perfect. I would really appreciate if you could send me the pictures you are talking about; I will try to improve it as soon as I have time, which might not be before a few weeks, but I'll try my best!

Thank you so much!

Beautiful livery, thanks for sharing

We kindly ask you to understand that we cannot process copyright requests through this form, as we are required to receive such correspondence in the form of a formal complaint to comply with the Digital Millennium Copyright Act. Please familiarize yourself with the DMCA procedure and send us your notification to the address below. Please note that incomplete or invalid complaints will not be processed.

In accordance with our policy, we respond to notifications of alleged copyright infringement that comply with the Digital Millennium Copyright Act on the U.S. Copyright Office website and other applicable intellectual property laws. Our response may include blocking access to or removing allegedly infringing material and/or terminating accounts. If we remove or disable access to material as a result of such a notification, we may notify the owner or administrator of the affected content to provide a counter-notification.